Use Code: FLASHSALE For 15% OFF At Check Out. Only For New Customers

The Team at King Gaming had a great time playing Resident Evil Village. Everyone knows we love a challenge and oh boy did Capcom Deliver. So before we get into the review of this horror filled ride of a game  lets give you guys a brief description on what Resident Evil Village is about.

Resident Evil Village is an upcoming survival horror game developed and published by Capcom. It is the tenth main installment in the Resident Evil series and a narrative sequel to Resident Evil: 7 Biohazard (2017). It also includes an online multiplayer  mode, Resident Evil RE: Verse. It was announced at the PlayStation 5 reveal event in June 2020 and is scheduled for release on May 7, 2021, for All Platforms.

Like Resident Evil 7 (2017), Resident Evil Village uses a first- person perspective . It is set in an explorable village. The inventory management system is similar to that of Resident 4 (2005), featuring a briefcase. Players can buy weapons and items from a merchant, the Duke. The players can also hunt certain animals in the village and have them cooked into dishes by the Duke, eating said dishes allows the player to get advantages such as decreasing the damage taken while blocking.

The Mercenaries Mode will also return in Village. Like previous Resident Evil entries it will be an action-packed arcade style game mode.

Resident Evil Village is set three years after the events of Resident Evil Ethan Winters  returns as the protagonist. Ethan has been living with his wife Mia and daughter Rosemary when Chris Redfield  suddenly appears and kidnaps him to a mysterious European village. Ethan has to traverse the village to rescue Rosemary. The village is governed by four different mutant lords, each controlling their own forces from strongholds within the village. Lady Alcina Dimitrescu, an extremely tall vampire-like aristocrat, leads her three daughters and others from her castle. Karl Heisenberg leads a group of werewolf-like creatures from a contemporary factory. Salvatore Moreau commands a number of mermen from a lake adjacent to the village. Donna Beneviento rules from her mansion, House Beneviento, and controls a puppet named Angie. All houses respond to the deity-like figure Mother Miranda, the ruler of the village who is a "presence worshipped by the villagers."

Now that we have the brief description out of the way, lets start talking about the game and what changes they have made. So lets begin on the running speed and how they finally improved this mans running speed lol. Thank God they made Ethan be able to run faster then my Grandmother speed walking. Because in Resident Evil 7 this man would run like a snail and literally have a demon breathing down your neck lol. SO IM SUPER GRATEFUL!! for the increase of running speed.

They have made a lot of improvements to Resident Evil Village with new creatures and bosses to face. An overwhelming load of werewolf/ zombies/ vampires trying to hunt you down where ever you go. they made the difficulty a lot harder on this one. nothing is more intense then having just 6 bullets left and about 10 zombies chasing you down lol. So when i say Hard Mode difficultly is hard, it sure is. So make sure to save as many bullets as you can. So let us dive deep into what makes this game so interesting and a horror filled ride. 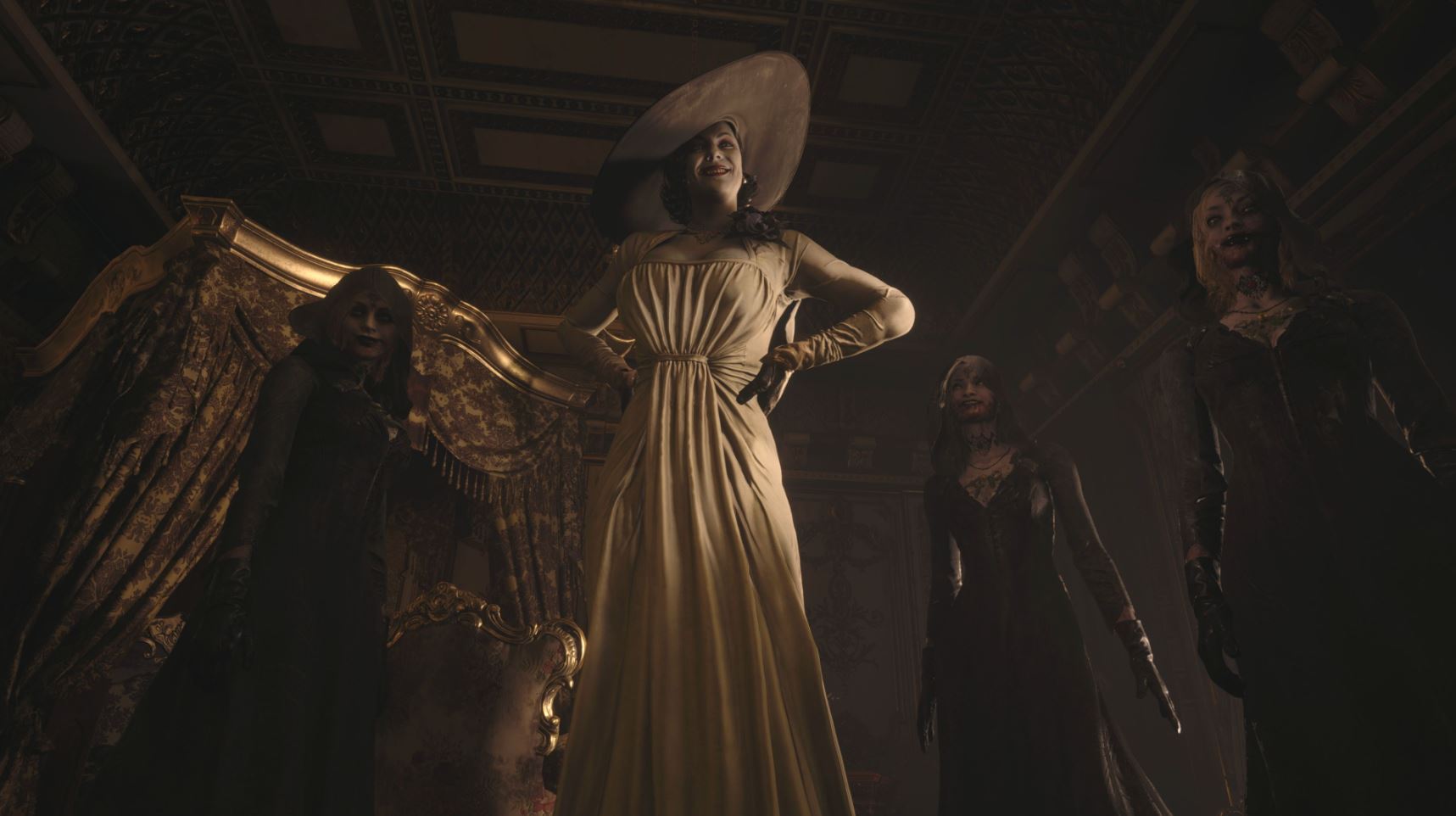 A Compelling Blend Of Action And Exploration

Resident Evil Village is expertly paced. There’s a superb balance between fighting, puzzle-solving, and exploring, with none of these three pillars overstaying its welcome. Village’s cerebral offerings are pretty solid; with ample use of backtracking and inventory tinkering to punctuate the rudimentary puzzle & locked doors that post-Resident Evil 4 game had.

When things do get messy, Village makes an emphatic improvement over Resident Evil 7. The variety of enemies here are among the best in the franchise since the beloved Resident Evil 4, with Lycans looking to satiate their bloodlust by ripping you apart with their bare hands, werewolf-like foes snarling and leaping on powerful hind legs, undead rising from the grave, and lumbering monstrosities that fuse flesh with machinery that require pin-point accuracy to neutralise. 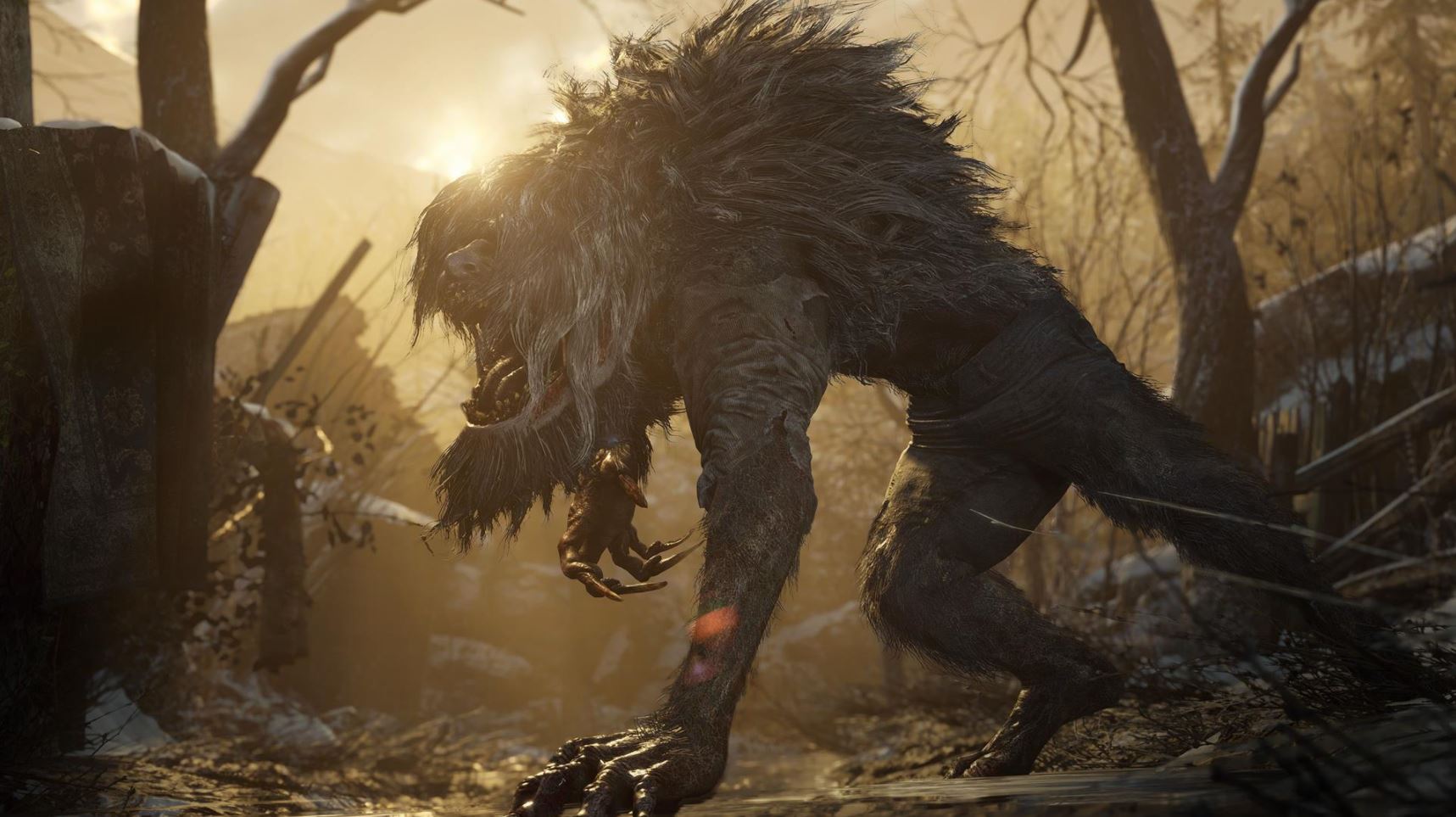 That’s not counting the myriad of behemoths that serve as Village’s boss battles, each one offering a unique challenge and personality that will put your diverse arsenal to fine use.

The merchant system also comes back, this time with the larger-than-life Duke, who is happy to flog you weapons and upgrades in exchange for cold-hard cash. This is a nice way to personalize your arsenal, although I didn’t see any overwhelming difference between the various handguns and shotguns on offer, even when increasing damage.

You can also hunt wildlife and bring their meat back to the Duke, who will rustle you up some tasty meals, acting as a way of buffing your stats, such as decreasing guard damage.

Treasures can also  be sold for currency, giving you plenty of incentive to head off and explore your surroundings. I mainly invested in fire power and capacity just because the higher damage will save you a bullet or two when killing a werewolf or zombie. Cause everyone knows in hard mode you open a lot of EMPTY DRAWERS!! which leaves you with next to none bullets. 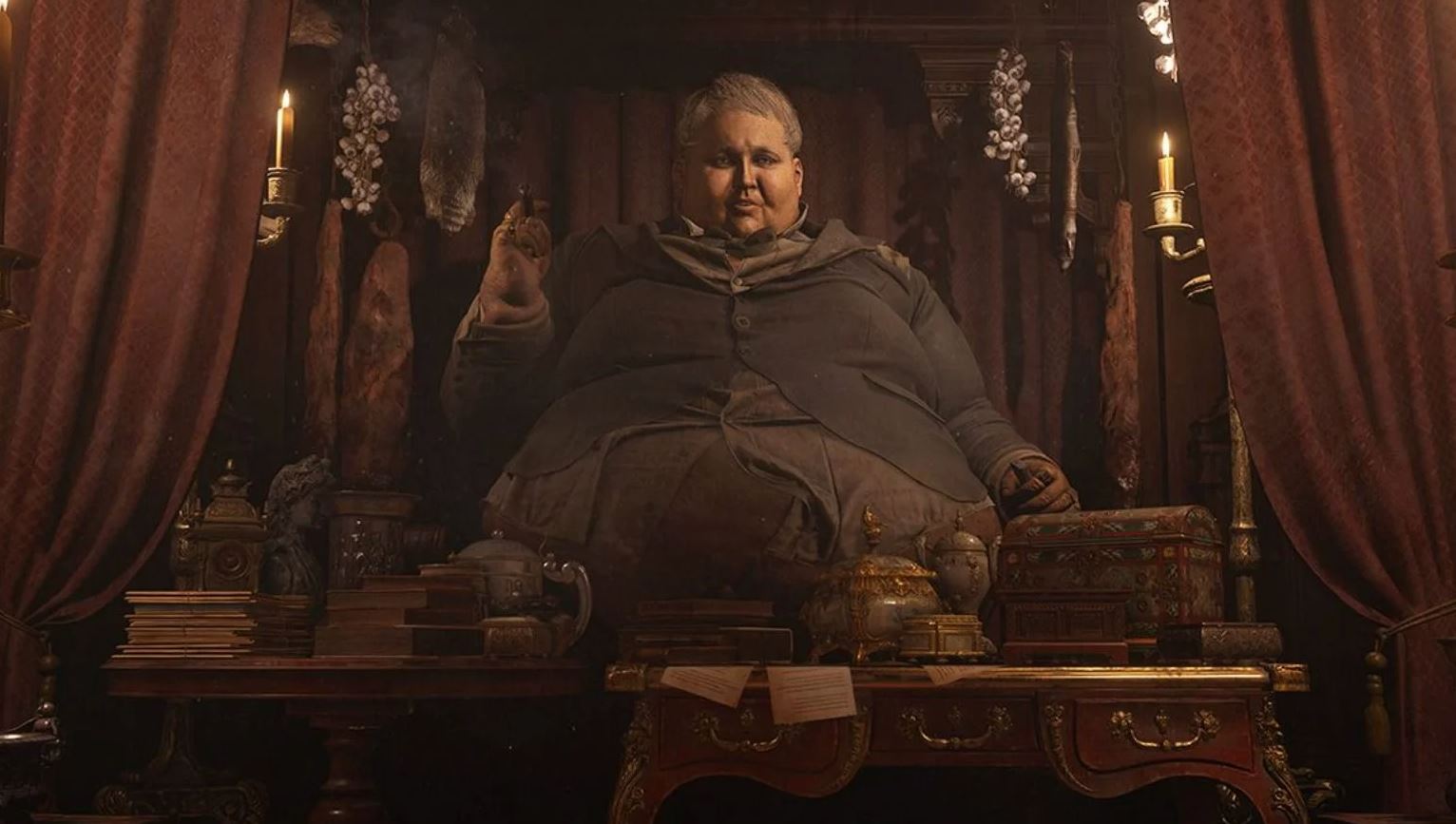 Village is at its best when it is keeping you guessing, whether it’s introducing new enemies or fresh puzzles to tackle, its core loop is enough to ensure you never get tired or bogged down by repetition. It excels at quieter moments as it does at going balls-to-the-walls.

Make no mistake; fans of both the slower-paced horror Resident Evil games and the more over-the-top shenanigans of latter instalments will feel more than at home here and it is a testament to Capcom’s ability of the new horror genre. 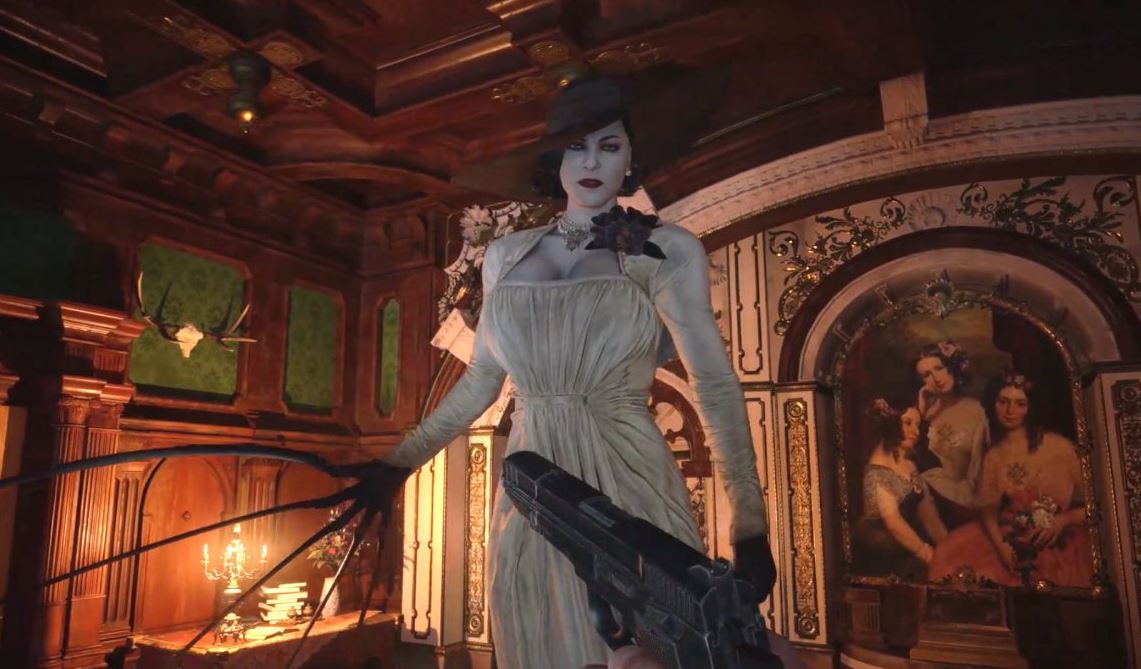 Resident Evil Village is a adventure in its own right, and with all the added secrets, hidden treasures, optional enemy encounters and files to pick up, it’ll have you racking up hours in the game. There’s plenty of incentive to replay the game too due to these aforementioned collectibles, and with a point system similar to Resident Evil 3 Remake, you can unlock figurines, art and infinite weapons on repeated playthroughs.

The Mercenaries mode also makes a comeback, although right now it only seems to offer one playable character in Ethan, so it’s a bit limited. Having said that, blasting enemies with various firearms and nabbing extra time is still as fun as it was back in the original Resident Evil 3, only this time there are multiple stages and ability-boosting capsules to keep things fresh.

PS5 users will get some great use out of the Dual Sense’s adaptive triggers, adding a punchiness to the firearms you’ll get hold of and giving them a real sense of weight.

Get your copy at King Gaming

Resident Evil Village combines the best of the past 25 years of the franchise, bringing a compelling adventure that should appeal to action and horror fans alike. With massive locations offering a wealth of exploration and hidden goodies, a meaty campaign with some decent unlockables, Village is the franchise at the top of its game

A short sentence describing what someone will receive by subscribing

We offer free delivery for orders 100$ & over in North America

All products sold by King Gaming have a 14 day return warranty. Except if items are damaged  or not returned in the same packaging. We do not offer returns on New Releases. All new Releases are final.

We offer customer support from Monday to Sunday from 12pm to 7:00pm.  Email - Or Call/Text To officially_kinggaming@hotmail.com

All Payments are processed through our payment system. None of your personal data is used or sold to 3rd parties